The 8 Most Valuable Items In My Video Game Collection

Welcome all to another edition of The 8 Ball! This week I’m here to actually talk about my own video game collection and some of the cooler stuff I’ve acquired over the years. A lot of this stuff I’ve gotten somewhat recently but some of it is a bit older. I’m always on the hunt for certain games as well, like the Castlevania Double Pack for GBA, Afrika for the PS3, Mega Man X2 for SNES, etc. So, if you have any of those, feel free to drop a line. Prices, as of late, have gotten kind of crazy since people have been stuck inside. I have a boxed copy of Rock Band 2, I’ve used the guitar a handful of times but the mic and drums have never even been opened. That is currently going for about $200, which is nuts, considering how everyone was throwing away that stuff 5 years ago. I’m also including the PriceCharting average of the item in question, where applicable.

Chrono Trigger is, at least was, the basic “expensive” game when it came to the Super Nintendo. Back when I bought my copy, it was around $100, or $120. That’s not exactly cheap but is attainable for most people. Things are a bit different today, given COVID pricing and with Chrono Trigger being about the 15th most valuable SNES game around, not counting promotional games, or development carts. And honestly, while Chrono Trigger is expensive, it is still a genuinely interesting, fun, and expansive game that most RPG’s still don’t have the scope of. Even the DS version has been creeping up in price over the past year.

I literally just got Persona 2: Eternal Punishment about three days ago, from when I’m writing this. I saw it in a store for $320, looked up how much it normally goes for, and bought it. Well, first, I checked to see the condition of the discs, the manual and the case then I bought it, since it’s good condition all around. As for Persona 3 Portable, I found it in a used store about 2 years ago. The guy, inexplicably, had 3 copies of it, each for $80. Only one copy had the manual, so that’s the ones I grabbed. With the price now hovering around $200 for a complete copy, that’s not a bad investment. Also, it’s Persona, and aside from the first one and an original copy of Persona 3, I have all the “main” Persona games now.

I finally got a copy of this one about a month ago now. There’s a semi-national chain where I live called Disc Replay, and they sell used DVD’s, games, electronics, etc. I bring it up because they have Facebook pages and, ideally, the good stores update those pages with pictures of their inventory. Like “We just got these 15 Sega Genesis games in”, or “A boxed SNES was just traded in.” Well, I was looking at the page of the store an hour away from me and they got in a nice collection of GameCube games in, including Fire Emblem: Path of Radiance. I called, asked the guy “You still got it?” After he said they did, I asked if it was complete (original box, manual, inserts, etc.), he said yes. I then hauled ass up there to buy it, trading in 5 or 6 DVD sets, and my boxed Steam Link/Controller, so the $300 price tag was whittled down to about $44. Not a bad afternoon, at all.

While the Goodwill stores around me are awful, they have an online auction site which is actually pretty good. I scored a copy of Mega Man X3 for the SNES for around $102. It actually has an awful label, it’s half torn off and there is a nice “PROPERTY OF SEAWAY FOODTOWN INC” rental sticker on it but I just think it gives it character. It’s the same reason why I love that my copy of Mario RPG has a hilarious “Blockbuster $.99” price tag on it, from when Blockbuster was blowing out SNES games around 1997 or 1998. Because of the label damage, my copy isn’t as valuable as a normal one, but I still think it has more character, at least.

I snagged a copy of Earthbound a year ago, right before the pandemic for around $170. It’s now over double that. All that comes to mind is “Yeesh”. I only have the cart but there is a local store selling a boxed (I assume complete in box) copy for around $1,000. And that is at least $500 cheaper than the average. Earthbound is a neat idea for a game but I don’t think it’s as inventive as like Chrono Trigger, or other RPG’s of its generation. Arguably, the big hook is that it takes place in “the real world”, which many RPG’s don’t actually do. It’s basically Earthbound, Yakuza: Like a Dragon, and Parasite Eve. Eh, that actually isn’t bad company when you think about it.

If there’s one game I’ll always have in my collection, it is Suikoden 2. Like every other game on this list, it has skyrocketed in value in the past year or two, but this was one I actually about 9 years ago. And it was my second copy, since my first was stolen from an old friend. I firmly love the Suikoden series, it goes 2, 5, 3, 1 and then 4, at least when it comes to the main numbered game. It is one of my all-time favorite games, and if you can’t get your hands on a legitimate copy, which wouldn’t surprise me given the cost, at least it’s still available digitally on the PS3 storefront. 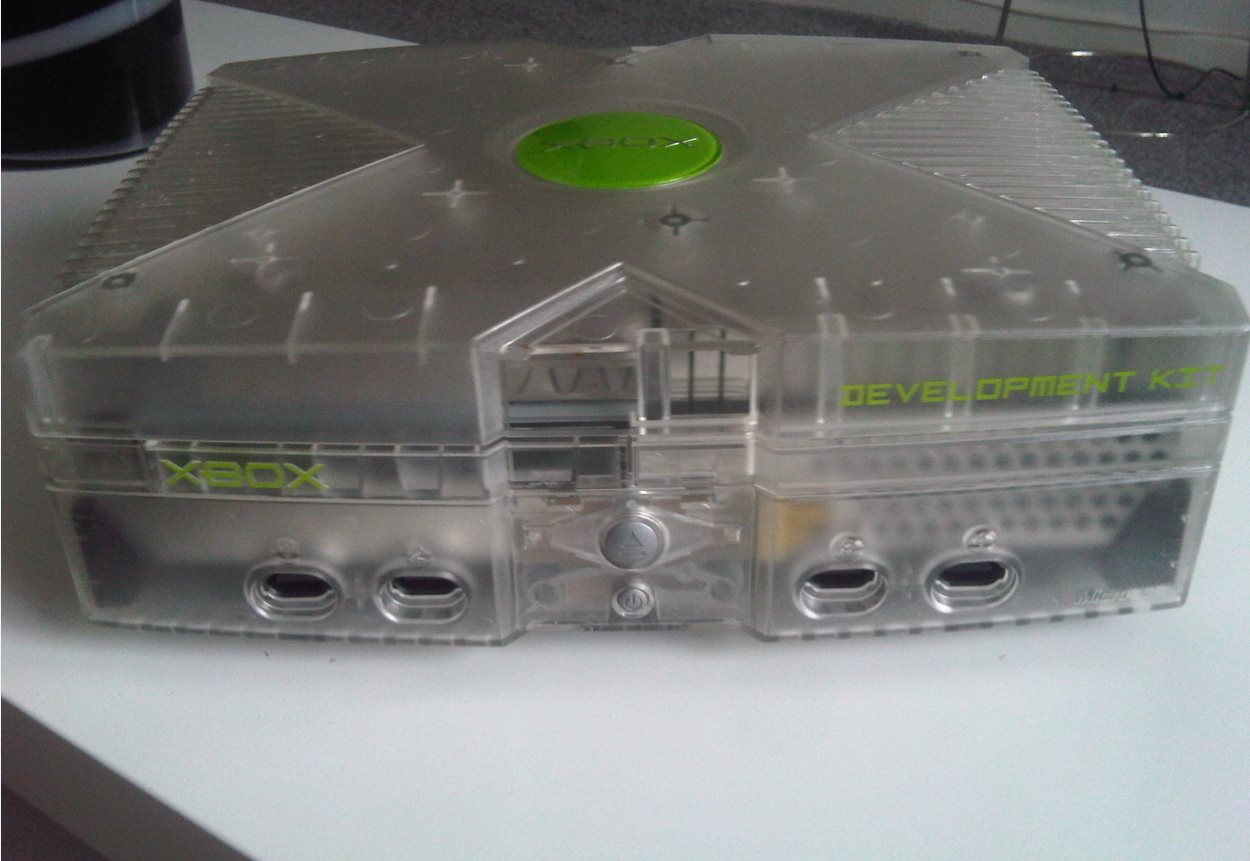 The first of my rare consoles. I have a Xbox DVT-4 Development Kit. This was a console that they used to develop games on and has a few differences. The most obvious is the size, it’s slightly taller than a traditional Xbox, because it has some weird networking/data cards on top. My DVT has a copy of something called “Sin2”, which is just the basic front-end for another game called Invasion, which looks like some domestic version Counter Strike or something. I literally know nothing about it, since it’s just a menu system, and the camera showing off a single home environment. I also threw on a debug copy of 007: From Russia With Love I had from an another debug Xbox I used to have and that unreleased copy of Starcraft: Ghost.

This is my baby, what I call “The Little Blue Meanie”. This is a debug PlayStation 1, model DTL-H1101 from Activision, at least according to the sticker on the bottom. Like the Xbox, this was used for game development but this system was used a tad later in the process. I imagine the DVT-4 was used more for actual development stuff, especially using Xbox Neighborhood and such. The PS1 debug was used more for QA to test games, or these are the units that old websites/magazines would get to review games before they came out. Unlike the DVT-4, which can’t play retail games (without tinkering, that is), my PS1 Debug can play anything you can throw at it, regular games, import (Japan/Europe) games, and even burned/copied games with ease. It’s a very cool system to have, especially if you want to play some old PS1 games.

For comments, list what valuable or expensive games you have in your collection.

Danial Norjidi Each year on May the 4th, Star Wars Day is observed to celebrate the ever popular sci-fi franchise....

Here Are The World Video Game Hall of Fame 2021 Inductees

The Strong National Museum of Play, a museum in Rochester, New York, devoted to the history and exploration of play,...

The Best World War 2 Strategy Games of All Time

World War 2 is one of the most popular historical settings in strategy games. The massive conflict allows for a...

Return to Outland on June 1 With the Launch of World of Warcraft®: Burning Crusade Classic™

IRVINE, Calif.--(BUSINESS WIRE)--“You are not prepared!” Fourteen years ago, Illidan Stormrage issued that thunderous warning to those who would dare...

Doublelift gives inside look of his hotel room in China

How declining interest rates, others drive a shift in Nigerian investment sector

Jets’ Quinnen Williams has surgery on broken bone in foot